Women’s solidarity fills the pots against the hunger pandemic in the hills of Lima.

Sunk between the northern hills of the city of Lima, between the districts of Puente Piedra and Ventanilla, is the human settlement of Valle del Sol. As in all the hills that make up the margin of the Peruvian capital, Valle del Sol is known as ‘invasion’, eight families from different provinces of Peru arrived in 2008 and built their houses on a land that, following the logic of Lima’s hills, ultimately belongs to whoever lives there. Those eight first clans were followed by many others, and there are currently 280 families there who have seen in Valle del Sol the possibility of raising a modest house and building a prosperous life as close as possible to the metropolis in a country as centralized as Peru. But life is hard in a neighbourhood so young that it hardly has power lines as its only service.
The State of Emergency decreed by the Peruvian State in mid-March in the face of the Covid-19 pandemic has exposed the scarcity of the hills. The majority of residents of Valle del Sol, like most Peruvians, have informal jobs that provide daily income and have been unable to work for more than three months due to quarantine restrictions. The Government announced $100 vouchers and aid for the most vulnerable, but in Valle del Sol all families are, and not even half of them have received the promised help. That’s why after more than a hundred days of quarantine the only thing that keeps the plates full is the solidary work of the women of the hill, they are the ones sustaining life in difficult times organizing common pots and strengthening relations between the neighbours so no family is left behind.
The problems that these women face go from cold and hunger to raising the children, the abandonment of their partners and State neglect. Some are waiting for the quarantine to end to return to their province, others have made the hill their home and are trying to get on with their lives and the their loved one’s. 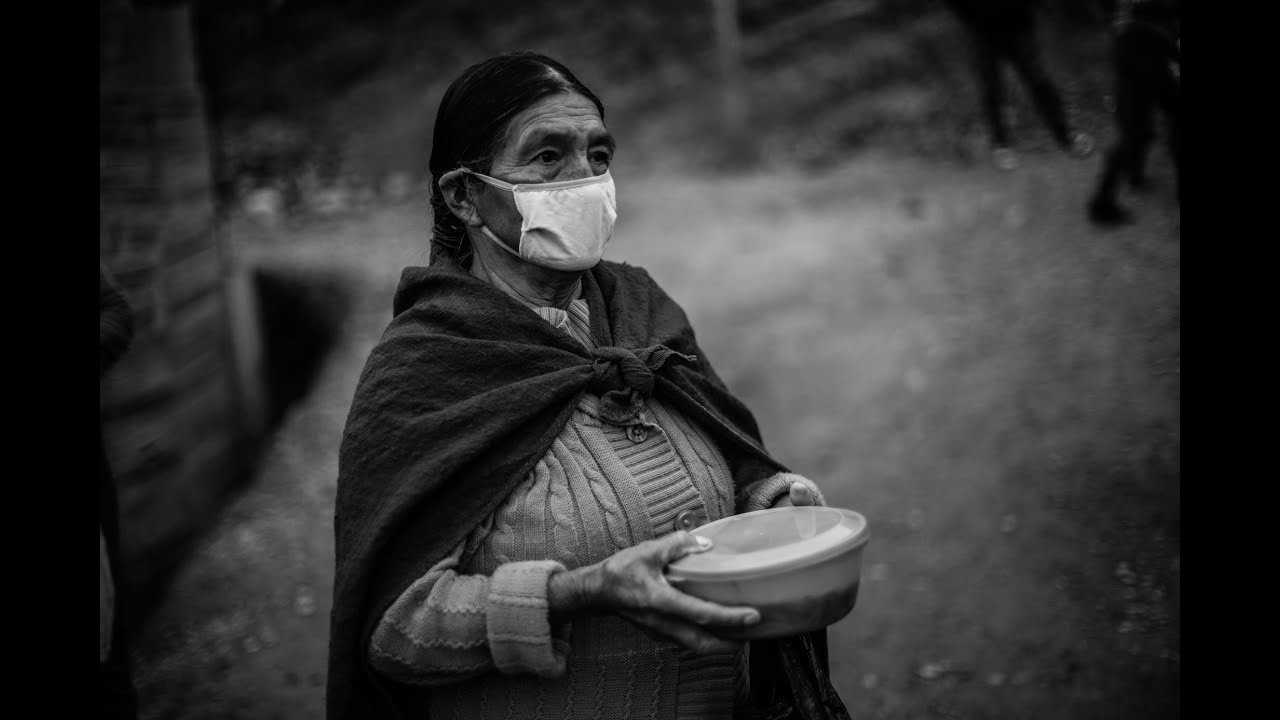 Sebastiana Cano (77) came from her town in Ancash before the pandemic. She’s a midwife, and came to Lima to help give birth to her daughter-in-law, Flor Fernández, but with the quarantine she couldn’t leave. Here, she can’t receive her pension -65 soles (18.34$) every two months- her son, who worked in a shoe factory is now unemployed because of the quarantine, and they haven’t received the voucher from the government. They are three adults, a child, and a baby of five months at home.

Valle del Sol is only reachable with a service of cars that leave from a garage in Puente Piedra, there’s no fixed schedule and the trip costs 2.5 soles (0.71$). The settlement has a central dirt track road for the cars, but to move in between houses you have to follow the paths traced by the steps of the neighbours themselves.

A metal pot of a hundred liters awaits steaming at the door of Gina’s house, the chosen place that day to cook and distribute the portions of chicken soup. Soups and stews are usual in common pots, since, when boiled in plenty of water, the same amount of ingredients produces larger quantities”

Adelaida López’s fridge is almost empty. However, that night she and her family had chicken soup from the common pot, brought to her house at the top of the hill.

At three in the afternoon there’s a queue forming of around 40 women, each with their container to take their portion. For each common pot, the organizers ask for only one sol (0.28$), with that and together with the donations they gather, the volunteer cooks prepare a big stew that, at least for a day, will calm the hunger of the families.

A group of neighbours go back to their homes carrying food portions for their families. One knows who goes hungry, but also how the neighbour is doing or if the kid got sick, and any problem or worry is talked about at the hill’s crossroads. In the absence of establishments for public use, the roads become meeting points to share problems and try to give solutions collectively, as neither the municipality’s authorities nor the government reach these remote areas of the Peruvian capital.

Adila Caisara (23) came from Iquitos to be with the father of her children because he found a job in Lima, but she wants to go back and the quarantine left her stranded in Valle del Sol. She’s two months pregnant of her fourth child and is not ready for the winter cold of Lima, she’s got arthritis and her hands and bones hurt. Adila wants to go back home because she feels abandoned by her partner, who left another woman pregnant and is not going to take care of Adila and her children.

Marionela Leon Santos has been living in Valle del Sol for three months. She moved here to have her child. She is eight months pregnant and her baby is almost here.

Deisi Altamirano (21) holds her daughter Adri, of two, who needs to wear a prothesis to fix the effects of Blount’s illness. It’s been two months since they run out of savings, and they haven’t received the voucher from the government, and although thanks to the common pots they dodge hunger, she needs money to buy diapers and other baby products.

The youngest daughter of Angelica falls sleep after playing with the children of a neighbour her mother went to visit. It’s 7pm and the humidity and cold of the first nights of winter can be felt in the bones. Angelica carries her daughter to bed; the few lights of the settlement barely light up the way of a very steep slope, with rocks falling off bit by bit.

Angelica, together with her daughter Melanixa and Gina, rest for a moment after distributing the last portion of the common pot. Angelica has been one of the organizers, and previously she also participated in support groups to take supplies to Lima’s hills during quarantine.

Adelaida is ready to serve for dinner the chicken soup of the common pot. She lives with her husband, her youngest son and her brother-in-law, who have all been unemployed since the pandemic started.

The houses of Valle del Sol are modest constructions of wood with cracks that let the cold of winter in, calamine roofs that multiply the heat of summer, and normally, the ground is just bare land. A box of wood and metal on top of raw land.

A wall topped with sharp glass is the limit of the hill with the nothingness of the other side: a quarry in decline where many of the men from Valle del Sol have worked. Angelica and some neighbours look over the fence, wondering when the activity will restart.

A group of neighbours and their children wait at the top of the hill of Valle del Sol. The internet signal doesn’t get to the lower parts of the settlement, so quite often the women have to take their kids to the top so they can do their homework using their cellphones. While the kids focus on their tasks, the women chat.

The power line goes up the hill to Valle del Sol with some posts, and it gets distributed irregularly throughout the houses of the 280 families living here. Not all of them have power, electricity arrives to the lower area of the hill, where there’s even some street-lights, but on the higher and remote parts, from 6pm one must walk in complete darkness through the slopes and paths that connect the houses.

Adelaida Briones heats her pot in the outdoor kitchen of her house at the top of the hill. She makes fire with some timber collected from abandoned buildings. She’s heating the leftovers from lunch, but she needs to add more water to get enough quantity. She uses the wood-burning stove because they don’t have enough money to buy gas cylinders. They calculate an expense of 50soles per week for food, but it’s never enough and they have to work miracles to stretch it as much as they can.

Justina Cigüeñas, 74, puts her head out of the window where she raised the white flag. Out of desperation, many families are forced to make hunger visible with this symbol. In many countries of Latin America, including Peru, those who can’t stand any longer without income or help of any kind are raising the sign of the surrendered, and in these cases all that remains is the support of the neighbourhood.

Angelica helps her father breaking stones and flattening a terrain in Belaunde, the hill next to Valle del Sol. Angelica has worked as waitress in a restaurant in Ancón, but with the virus spreading around Peru, she is afraid of exposing herself in a client faced work. They are lucky they get an income during quarantine breaking stones, flattening and conditioning the ground for a future construction. They will get paid 2500 soles (700$)

The cooks are the neighbours themselves, who gather everyday at 8 in the morning to prepare the ingredients for the common pot. At the settlement bordering Valle del Sol, known as Belaunde Terry, the cooks cut potatoes, carrots and some other vegetables that will go with the chicken guts, the main nutrient of the dish. They are preparing Cau Cau, a typical soup of the Peruvian gastronomy

A little girl waits for her mother at her house’s doors with the strays dogs she plays with all day long. The women of the hill take care of the kids when their parents are away. In these times of social isolation, mutual aid will be the only thing that will help us get ahead.